In the colours of Le Corbusier 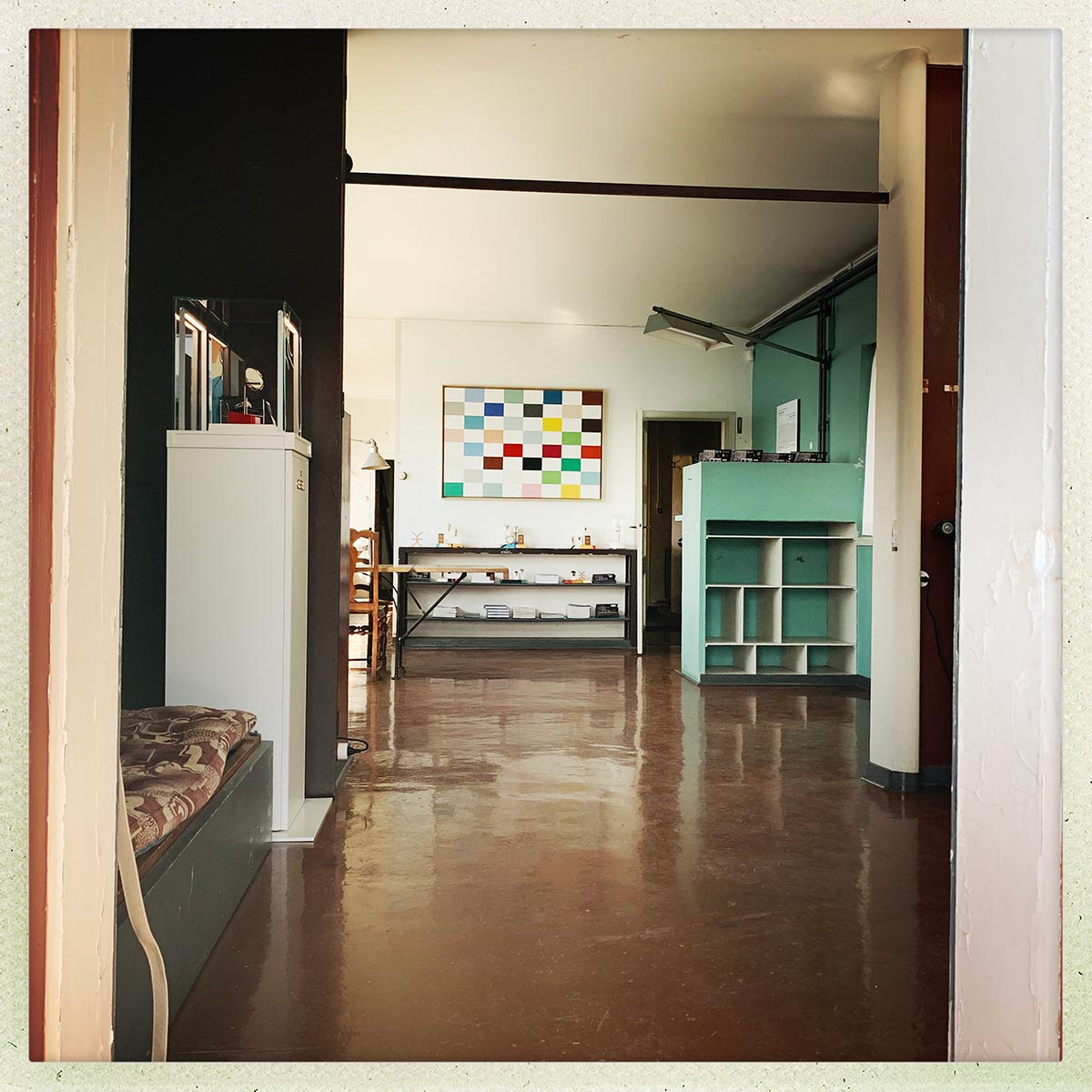 The interior of Villa Le Lac, built by Le Corbusier for his parents in 1923. Photo: Isabelle Cerboneschi.

The "Couleurs et correspondances" exhibition, held at Villa "Le Lac" in Corseaux until June 2nd, reveals the architect's relationship with his family and the small house through family letters and monochrome paintings by the artist Florence Cosnefroy. - Isabelle Cerboneschi.

The Villa "The Lake" hosts until June 2nd an exhibition that allows visitors to enter the privacy of Le Corbusier. More than an exhibition, it is a silent conversation between the walls of the house, excerpts of letters exchanged with a family and monochrome paintings painted by the French artist Florence Cosnefroy who shows images next to these intimate writings. This installation allows us to understand how the Jeanneret family lived between these walls, to glimpse the evolution of the career of one of the greatest architects of the XNUMXth century: Charles-Édouard Jeanneret, aka Le Corbusier.

He built the Villa Le Lac in 1923 for his retired parents, on the edge of Lake Geneva. A simple house of 64m2, set with a huge window that runs over almost its entire length, offering residents a panoramic view of the lake and its changing effects. A way to integrate the outside inside. Listed as a UNESCO World Heritage Site since 2016, this functional little villa has served as a think tank for Le Corbusier. It includes three of the "Five points of modern architecture" published in 1927 by Le Corbusier and his cousin Pierre Jeanneret: the free plan, without wall, that allow structures with poles and slabs freeing space , the window blindfold - this one is 11meters long - which opens to the world and the rooftop terrace. The other two points are the pilings and the free facade, of which Villa Savoye is one of the most telling examples. Le Corbusier also developed a color theory, "Architectural Polychrome", which resulted in a color chart of 63 hues still used to this day.

Until June 2nd, the walls of Villa Le Lac host the exhibition "Colours and connections". An installation by Florence Cosnefroy, who has managed to establish links between the abundant family correspondence and the house. It was inspired by slices of life to which it gave colours: in total 32 monochrome paintings sit next to extracts of letters exchanged between 1923 and 1965, as well as some watercolors of the house.

"Five years ago I discovered Le Corbusier's colour chart and since that day I have been working on different sites he has designed since 2014. I meet the inhabitants, I ask them how they live in a Le Corbusier building, I collect images, memories, in order to make temporary installations, a kind of collective of colourful work ", explains Florence Cosnefroy who has already worked on the roof terrace of the Cité Radieuse in Marseille or the 12 pillars of the Swiss Foundation at the Cité internationale universitaire de Paris.

At the invitation of Patrick Moser, the curator of Villa Le Lac, the artist searched the place to create a work entirely inspired by this small house. "I let myself be guided by a few of the 1800 letters exchanged between Le Corbusier, his father, his mother and his brother, Albert Jeanneret. I looked for references to the Villa, the colours and with some extracts, I tried to talk about the little house. Through this correspondence, I saw a caring man, very close to his family, full of doubts and dreams, who created an easy-going home for his parents, in an idyllic place. A character who is very different from the great cold and distant architect that we think of. He made this house an architectural manifesto that he used later. There are many elements of his style: the strong link with the outside, the perfection of the details and especially the very particular framing. Whatever the angle from which one looks at the house, one finds perspectives, landscapes framed. It's an artist's job. "

The exhibition takes a chronological direction. It begins with the main room where the letters refer to the beginnings of the little house up until his father's death. It continues in the blue-walled guest room. In these years before the Second World War, we feel the house live according to the seasons. We take note of the road that is built right behind. We read in-between the difficulties that Le Corbusier met in his career at that time, his daily life in Paris. Then we go to the pink room, that of his mother. We are in the post-war era, the Radiant City is being built, Le Corbusier tells about his travels, the mother describes the life of the house, the blossoms, the lights, the works. The journey ends after the death of the mother, with a letter signed by Albert Jeanneret.

"When I arrived here, I was struck by the beauty of the place and the contrast of this perfect little house and the immensity of the landscape," says Florence Cosnefroy. Here reigns a certain idea of ​​perfection. In total she chose 32 letter extracts and created 32 monochrome paintings. "The colours I used are those of Le Corbusier's colour chart. He had received an order from Salubra, a Basel wallpaper dealer, and had created monochrome wallpapers ("oil paint sold in rolls", in the words of the architect, editor's note). I was able to get the pigments that are still made. I looked at each letter for a reference to a colour and I used the shade of the colour chart from Le Corbusier.

Above the missive announcing the death of Le Corbusier's mother, Florence Cosnefroy hung a bright pink monochrome. "I chose this artificial rose because in the letter it mentions her burial and the memory of a hat" bristling with artificial pink flowers. "We live in the memory more than in the real," explains the artist.

A red car full of flowers and a little pink mum, in bloom in her coffin, have been left on the red of the Levant miraculously empty of car, the snow having fallen thick, the snow falling miraculously ... "Le Corbusier à Albert, 18th February 1960.

* Colours and connections, Exhibition of Florence Cosnefroy at the Villa "The Lake", the road of Lavaux 21, 1802 Corseaux. The exhibition is sponsored by watch firm Ebel and Keim. Until 2nd of June 2019. The Villa is open on Saturdays and Sundays from 14pm to 17pm. 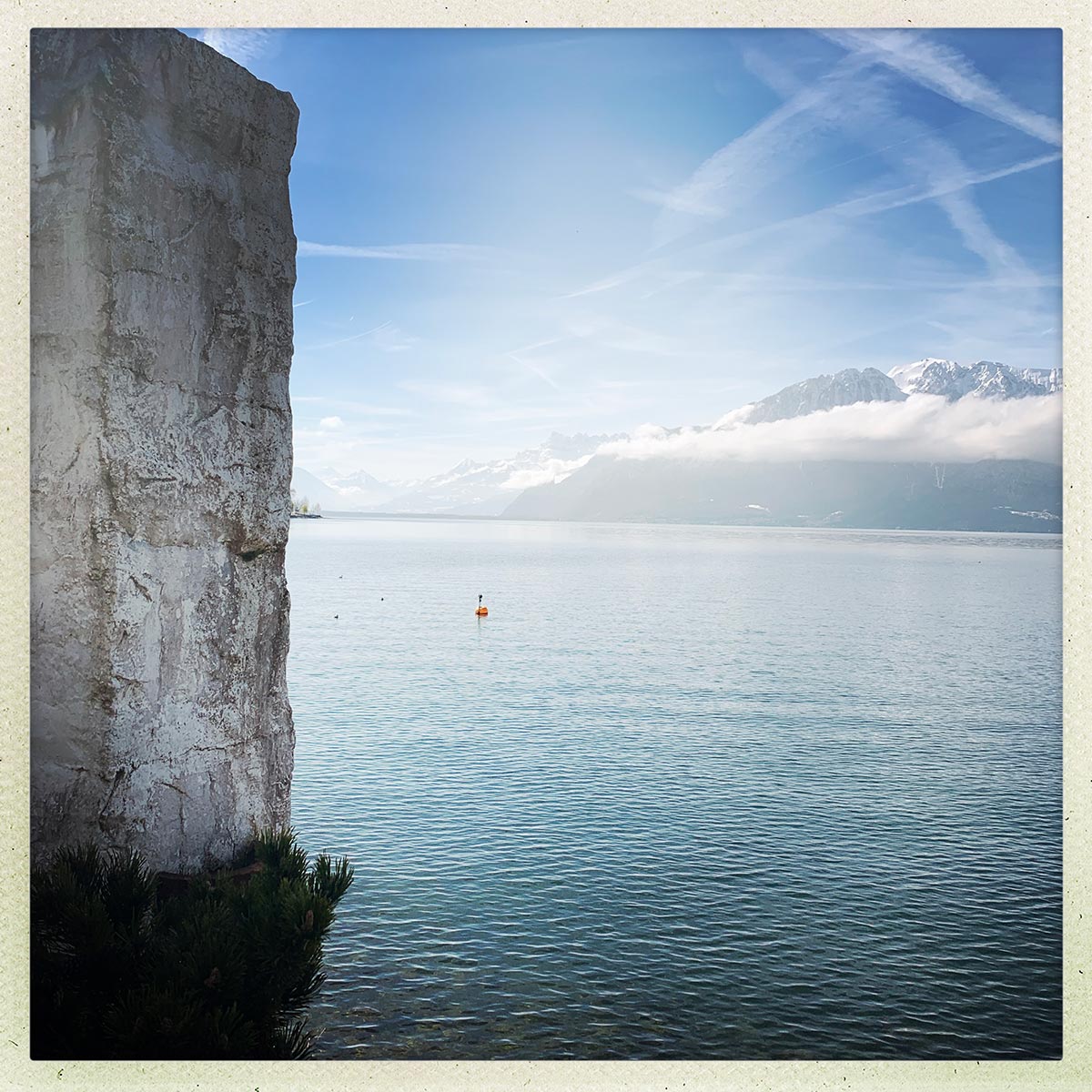 The view from the garden of Villa Le Lac, in Corseaux. Photo: @Isabelle Cerboneschi. 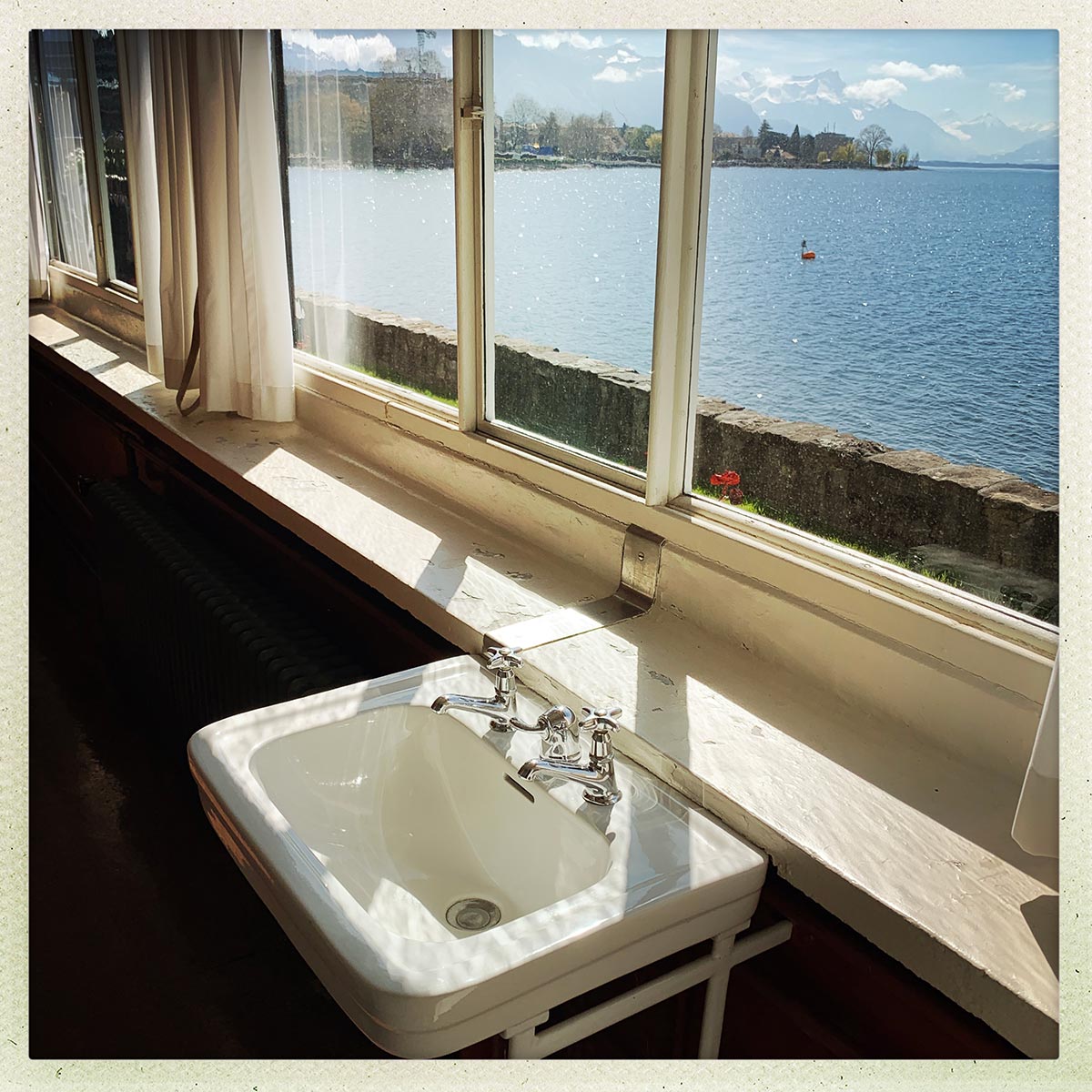 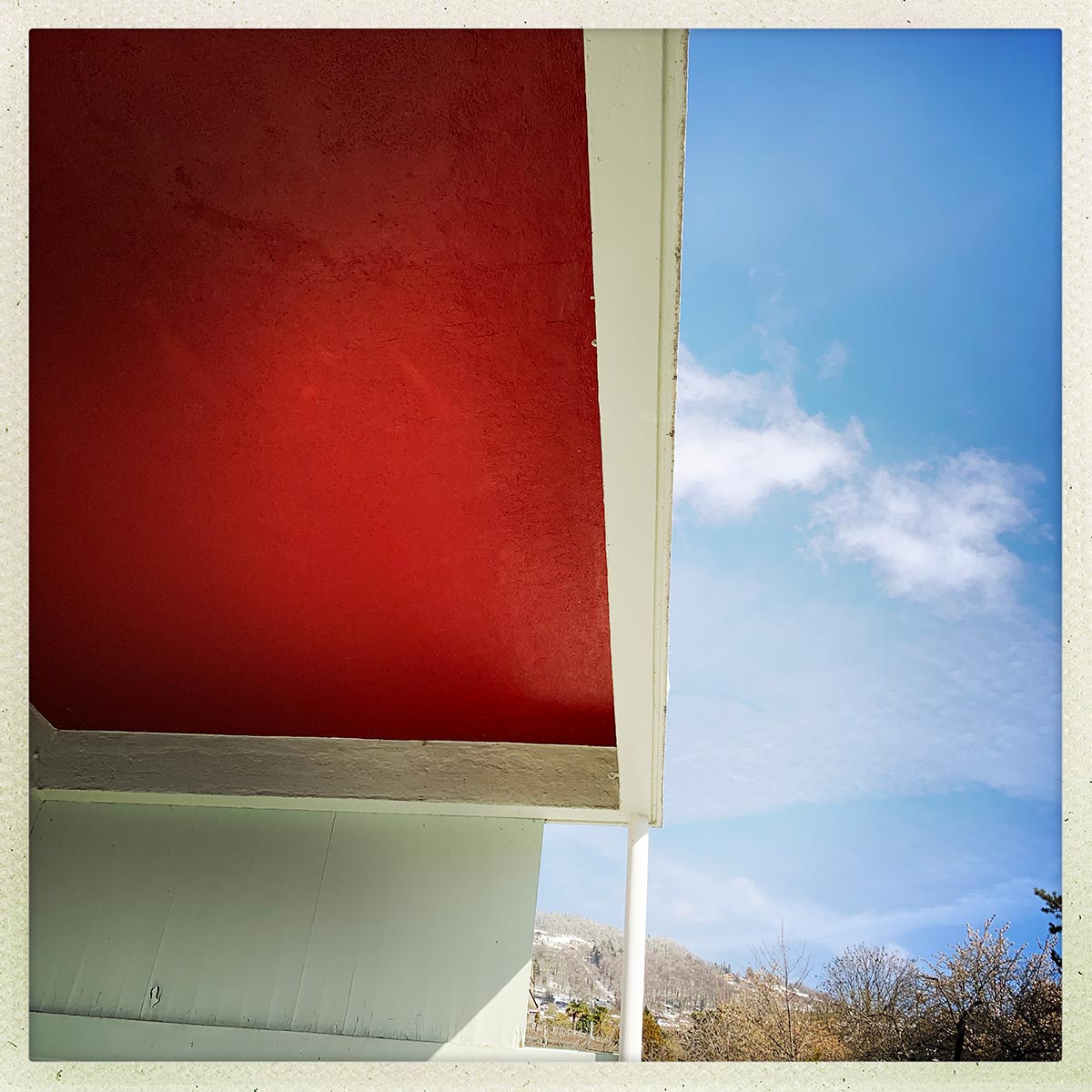 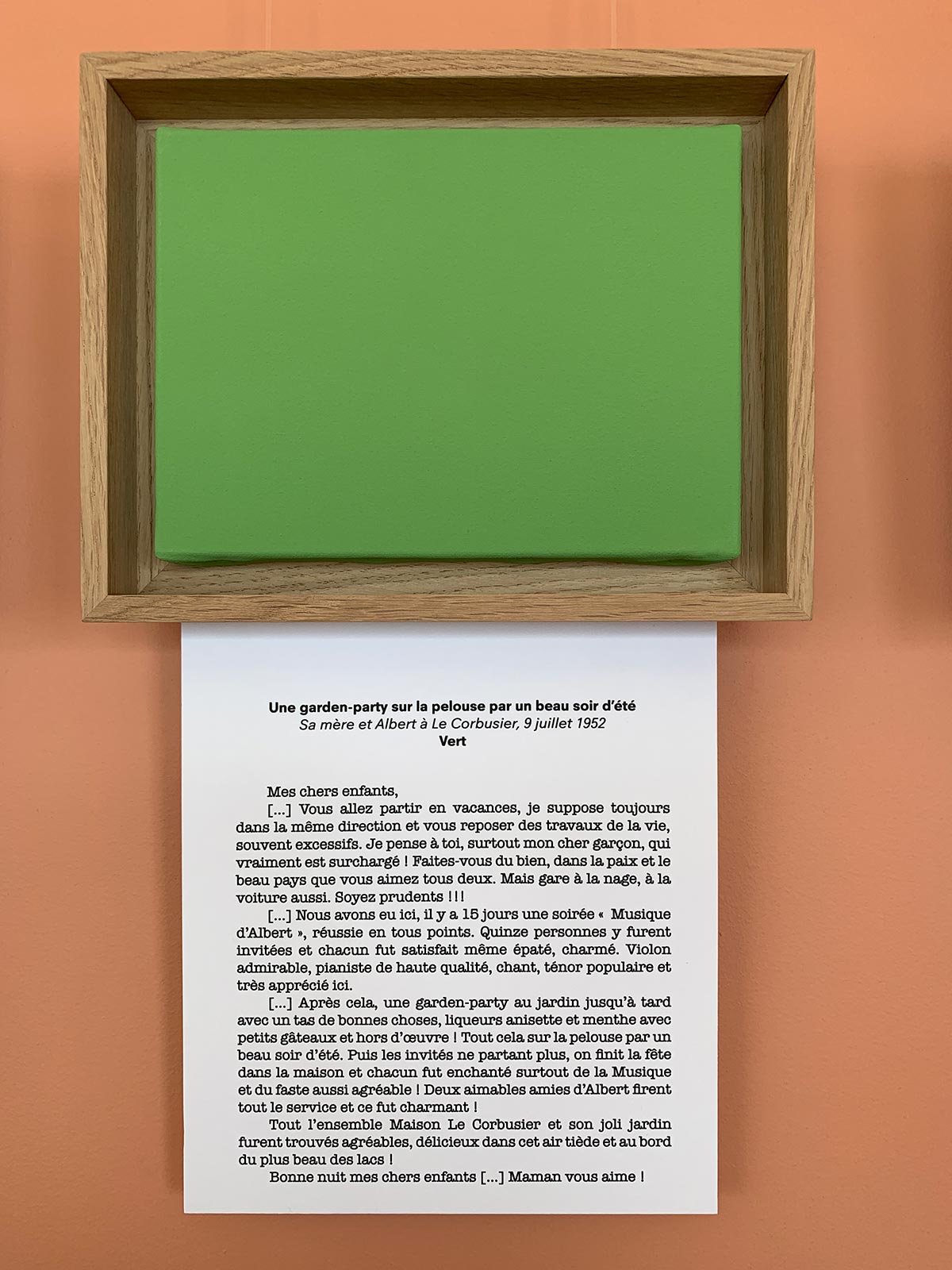 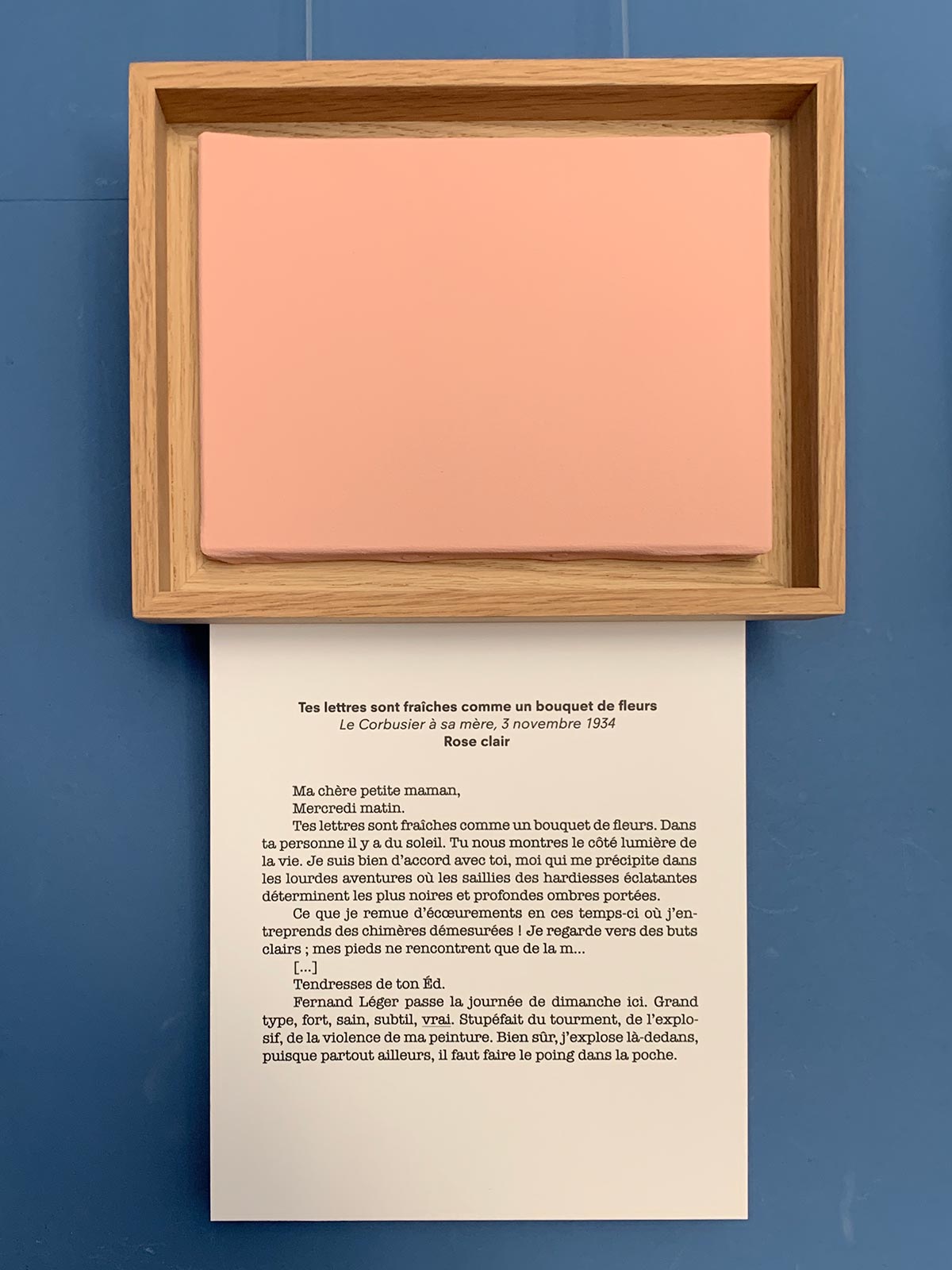 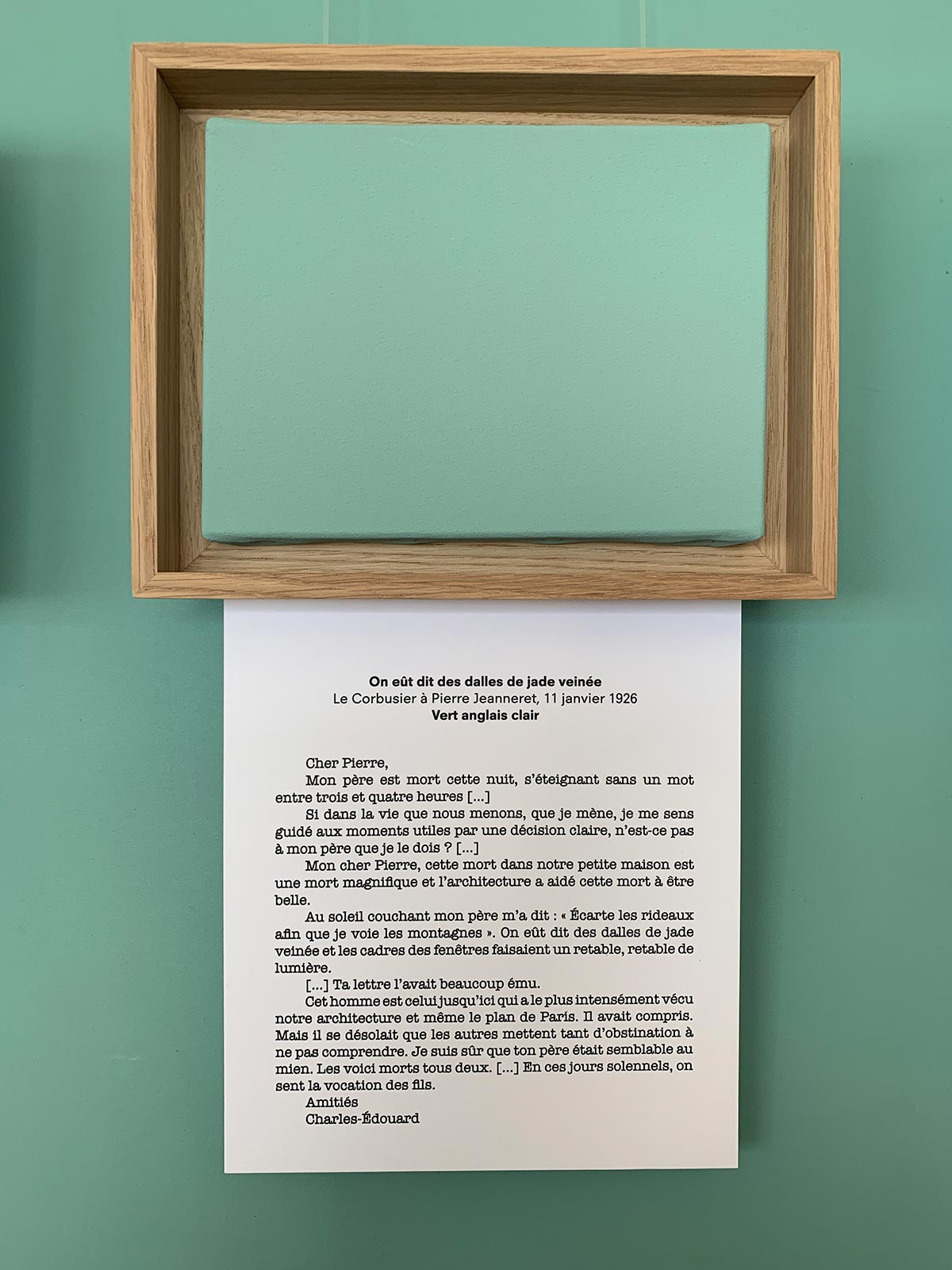 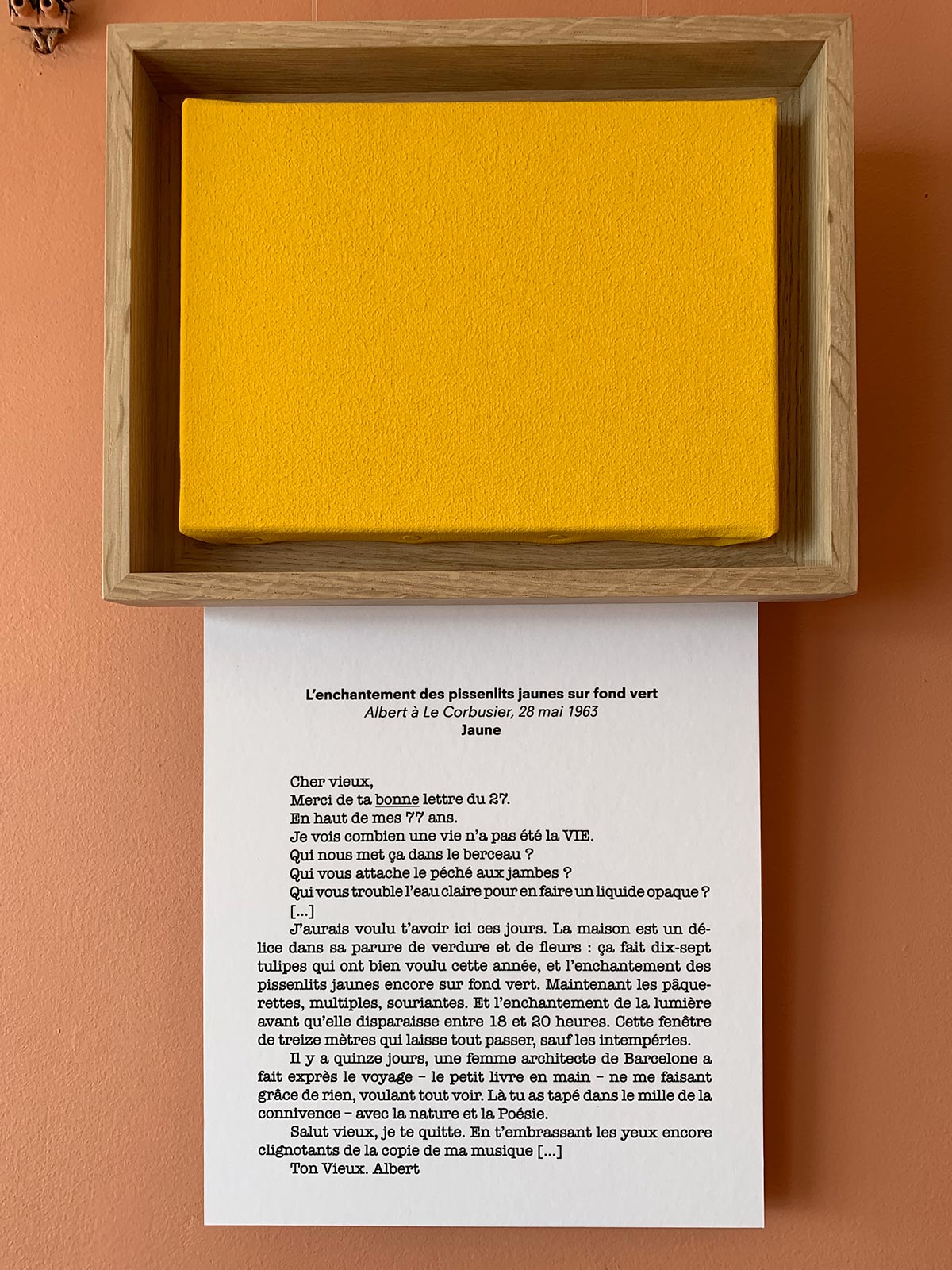 Any cookies that may be necessary for the website to function and is used to collect personal data via analytics, ads, other embedded contents are termed as non-necessary cookies. It is mandatory to procure user consent prior to running these cookies on your website. 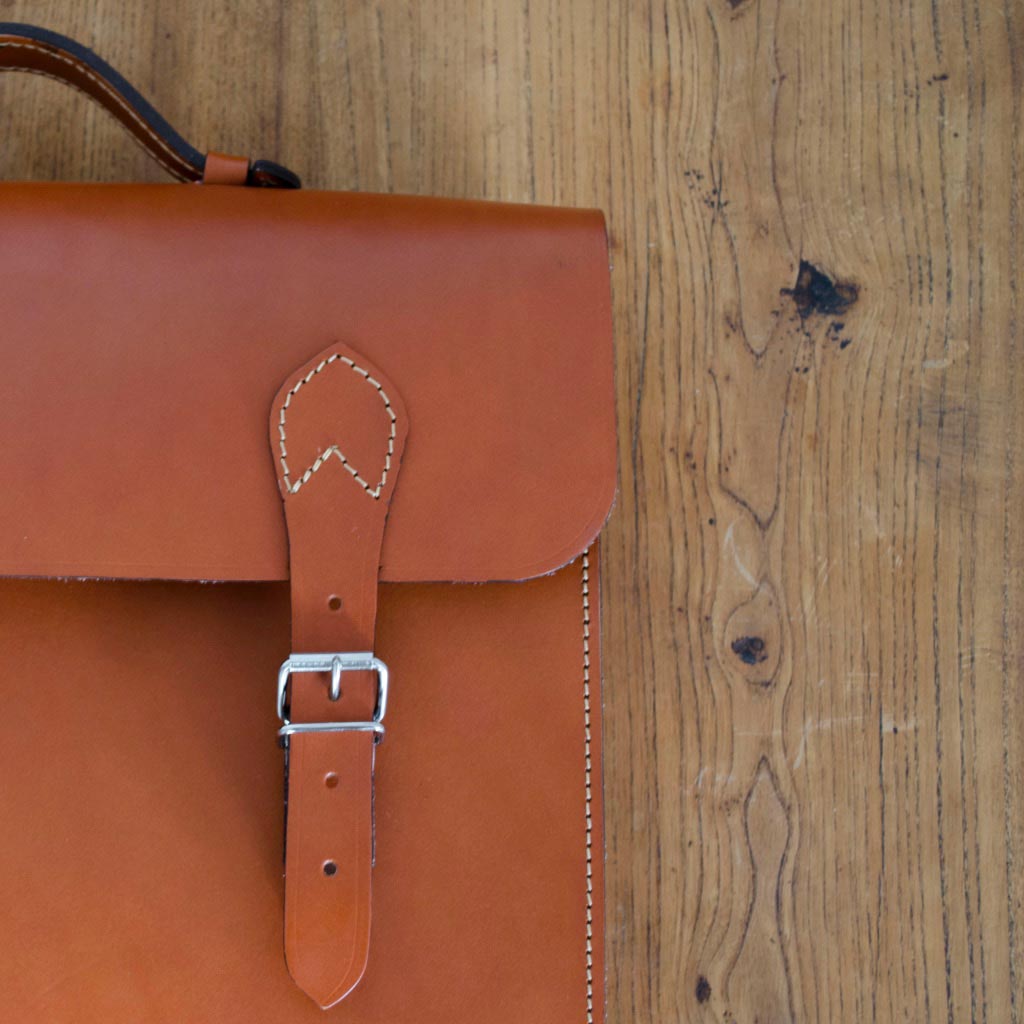 With Émile at my sideACCESSORIES, CRAFTS, ECO-RESPONSIBLE, FASHION, KNOW-HOW