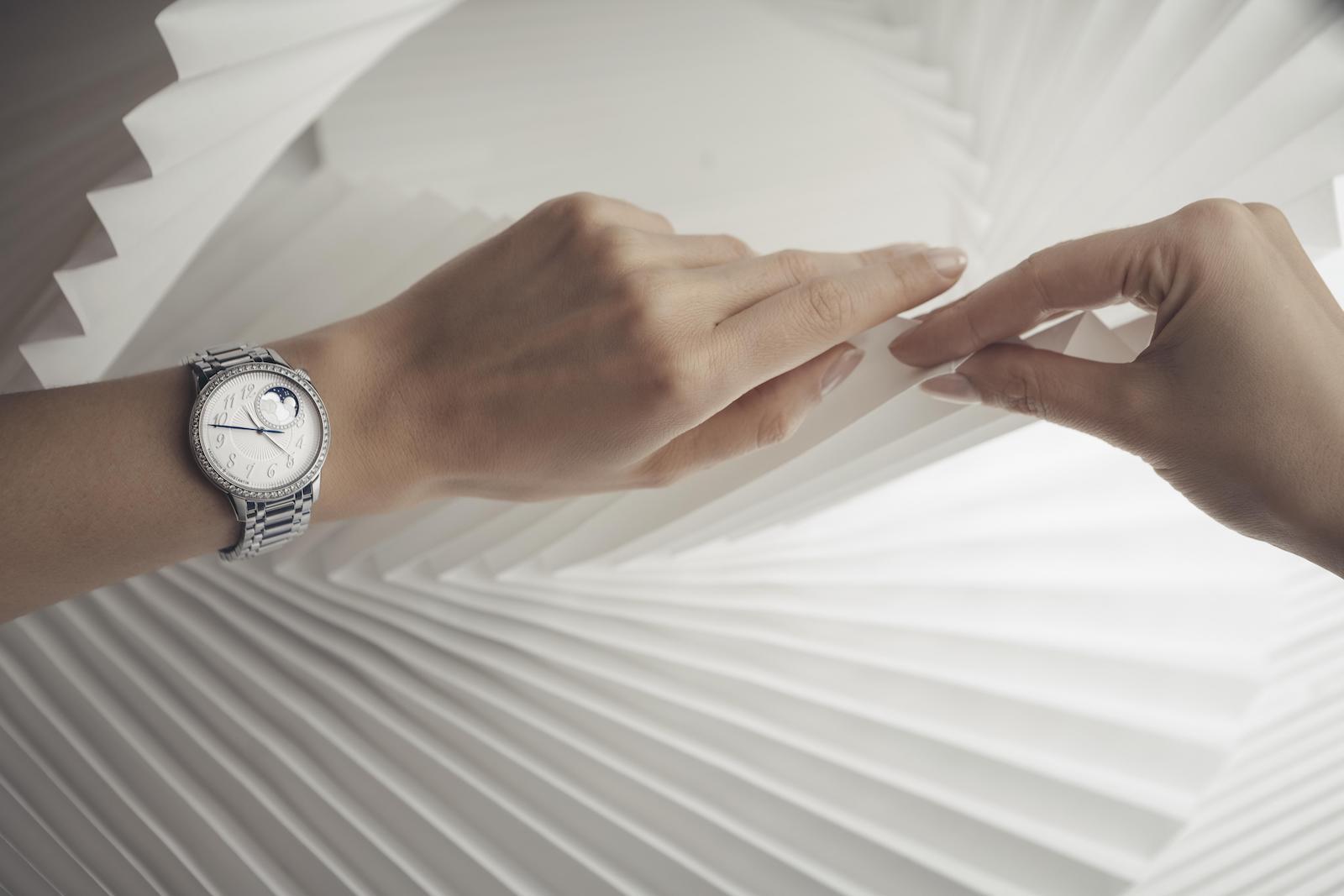 The launch of the Égérie watch last February is not a surprise when you know the history of the watchmaking company. When one thinks of Vacheron Constantin, one usually thinks of its men’s timepieces. However, it has always created watches for women. A long love story. The proof in the archives. Isabelle Cerboneschi 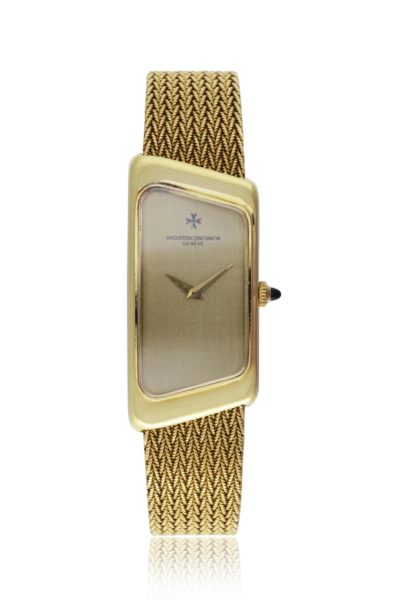 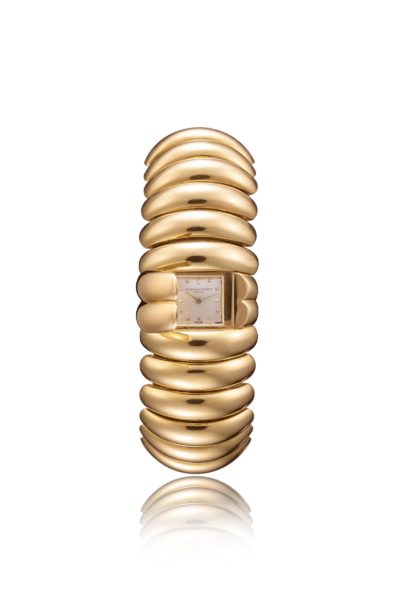 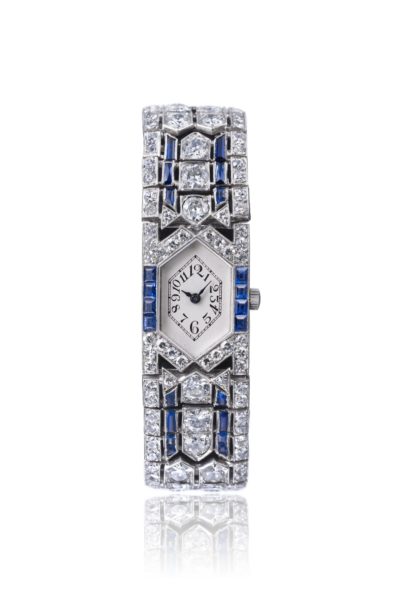 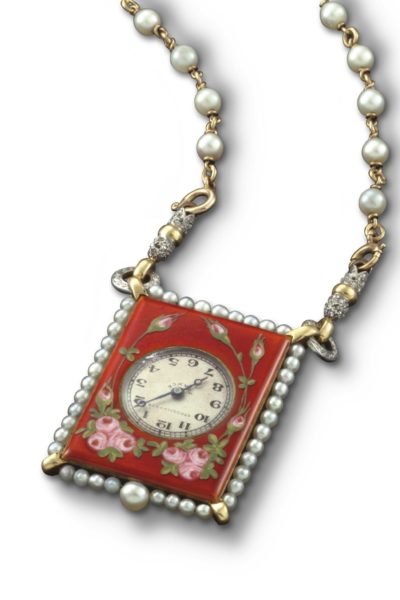 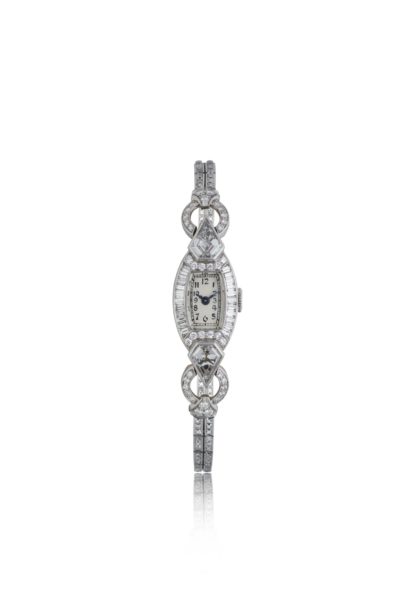 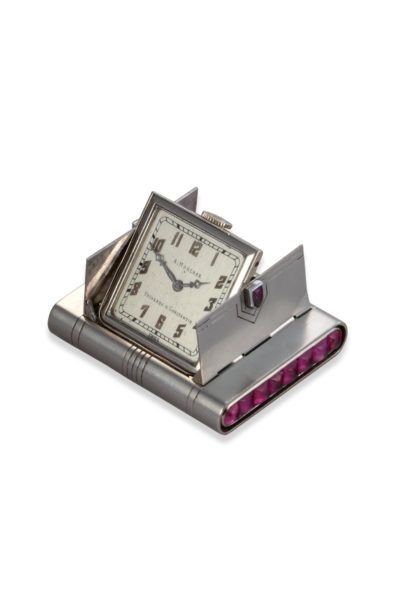 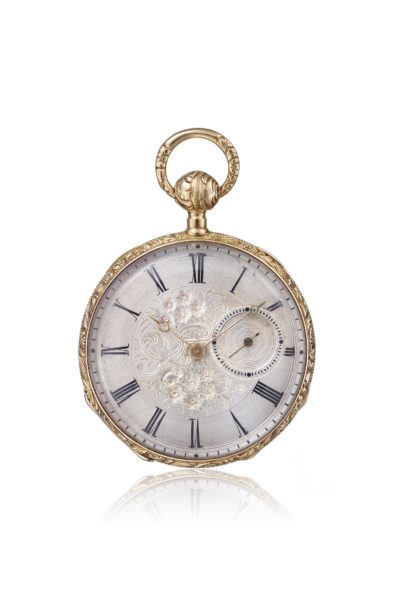 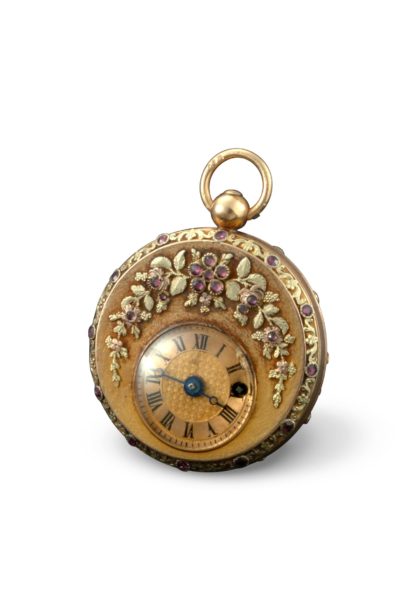 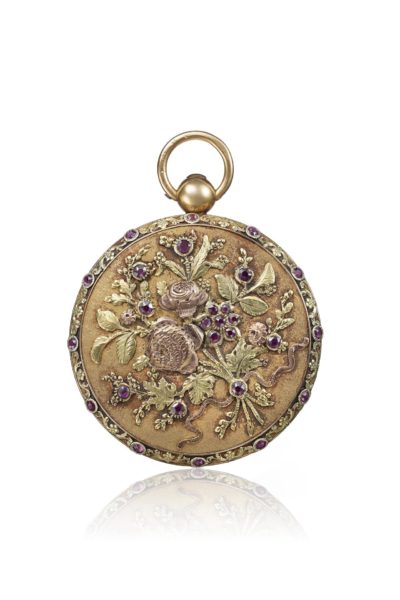 In the imagination of those passionate about fine watchmaking, the Geneva-based Manufacture Vacheron Constantin holds a special place. With its 265 years of history, the company continued to operate successfully over the centuries.  It is known mainly for its men’s timepieces equipped with sophisticated movements, and yet since its beginnings, the company has been creating watches for a demanding female clientele knowing quite well the art of watchmaking.

During a visit to the Manufacture, I was lucky enough to discover some historic women’s timepieces that are rarely or never shown. These little jewels that tell the time are animated by movements created specifically for small watches adapted to women’s wrists. In a catalogue, sublime black and white images dating from the 1930s reveal women posing, one with a watch on her wrist, the other with hers on her belt. The timepieces are not photographed in close-up, as is customary in today’s advertisements, yet one is irresistibly attracted to them because the models’ gaze leads to the watches. The photos were taken by the famous Geneva studio Boissonnas. It is beautiful and subtle. A lesson.

By going through some selected archives, I was also able to read many letters signed by clients: in the 19th century, 30% of the letters received by the Manufacture were from women. These women demonstrated an astonishing knowledge of watchmaking and did not hesitate to make a few proposals to the Vacheron Constantin to use new materials which would make the bracelet of their timepiece more supple, with sketches to back them up.

Last February, the watch company unveiled a new feminine model: the Égérie watch, whose ambassador is the dressmaker Yiqing Yin. A watch that would not have been possible without the long history that links women and Vacheron Constantin watches.

Among all the watches discovered on the day of my visit to the Manufacture, I chose to highlight two models from the archives. Each one reveals the attention paid by the Geneva house to women and reveals a little-known part of the history of Vacheron Constantin.

The oldest wristwatch of Vacheron Constantin

In 1886, Adolphe Veyrat, Vacheron Constantin’s Parisian agent, has heard that one of the company’s best Parisian clients, the watchmaker Jacques Gustave Sandoz, better known as Gustave Sandoz, would pay him a visit.
This watch and jewellery maker, born in Paris in 1836 to a French mother and a Swiss father, was the descendant of a family of watchmakers from Neuchâtel. He chose to pursue this profession, like five generations before him.
This brilliant scientist was awarded the Grand Prix d’Honneur of the Polytechnic Association, created by Napoleon III, in 1855. He worked for Lépine and for Breguet, before creating his own company. This watchmaker was specialised in the repair of regulators, marine chronometers, astronomical clocks and all the most precise measuring instruments of the time.
When success came, he was keen to add to his talents as a watchmaker a jeweller’s know-how. His fame reached its peak at the end of the 19th century, particularly during the 1870s and 1880s. He was also invited to participate in the preparation of the 1889 Universal Exhibition.
For this occasion, he ordered a very special timepiece model from Vacheron Constantin in Paris: a ladies’ jewellery watch, powered by a 9” movement and fitted with a gold bracelet featuring two sculpted caryatids whose wings serve as attachments.

This precious timepiece, which is kept in the company’s archives, is engraved on the back with the words “Gustave Sandoz Paris”. Its bezel, which is used for winding and setting the time, is set with 24 rosette diamonds and its case middle is chiselled. The watch has an enamel dial with 11 Arabic numerals in blue and the 12 o’clock in red.

It is the oldest wristwatch signed Vacheron Constantin known to date. 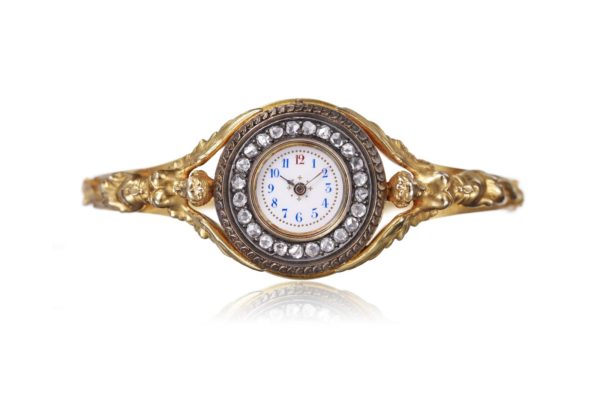 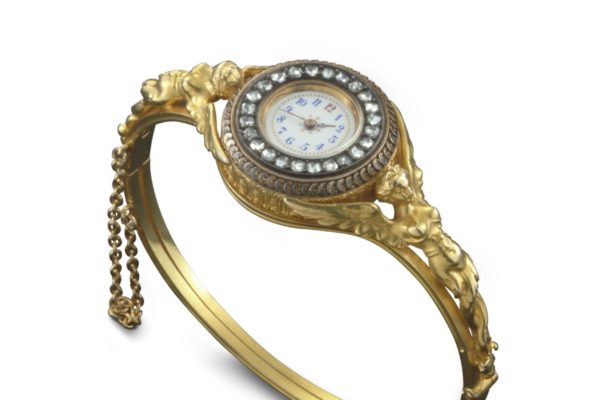 The watch of the maharajah of Patiala

From 1879, and for sixty years, the Vacheron Constantin Manufacture formed an alliance with the French jeweller Ferdinand Verger, who became Verger Frères in 1921. Together, they created jewellery precious timepieces in the style and taste of the time, including some Art Nouveau and Art Deco marvels.

The Verger company had filed numerous patents in the field of jewellery and watch decoration, and Vacheron Constantin was naturally able to benefit from these inventions. Thus, in the company’s archives, we discover a bag watch with flaps that are mechanically released to reveal the time. The collaboration between the two houses ended in 1938, but the precious link between Vacheron Constantin and women has endured.

The desire for aesthetics, purity, miniaturisation and sophistication, which corresponded to the taste prevailing at the beginning of the 20th century, prompted watch creators and designers to invent new systems. This is the case of the so-called “pipe” movement, which was renamed “baguette”. Invented in 1915 by a watchmaker from the Manufacture, this rectangular movement measures 6.5 millimetres wide and 26 millimetres long. It’s been used for a historical model kept by Vacheron Constantin, which was created in 1916. This watch has moreover met with an astonishing fate.

In 1921, during a trip to Geneva to attend the autumn general assembly of the League of Nations, Bhupinder Singh, the maharajah of Patiala, a great lover of stones and jewellery, visited the Vacheron Constantin boutique. Escorted by two of his many wives, his Sikh bodyguards and his secretaries, he had acquired watches for an amount of one hundred and fifty thousand francs at the time (approximately nine hundred thousand francs today).
Among the many timepieces he purchased that day was a platinum wristwatch with a chiselled case set with a row of diamonds. The curved platinum makes it possible to read the time when the watch is in profile.

Years later, Vacheron Constantin was able to purchase this precious bracelet that tells the time and is now part of its archives. 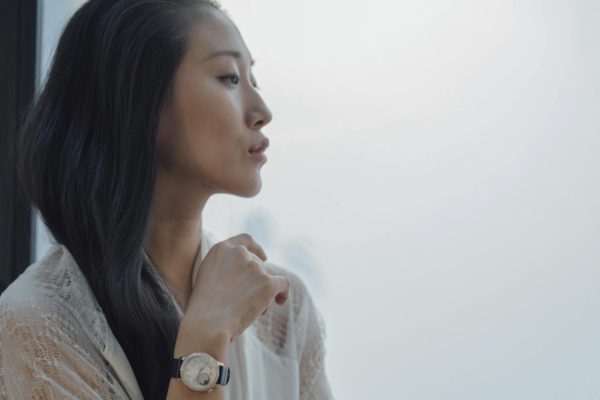 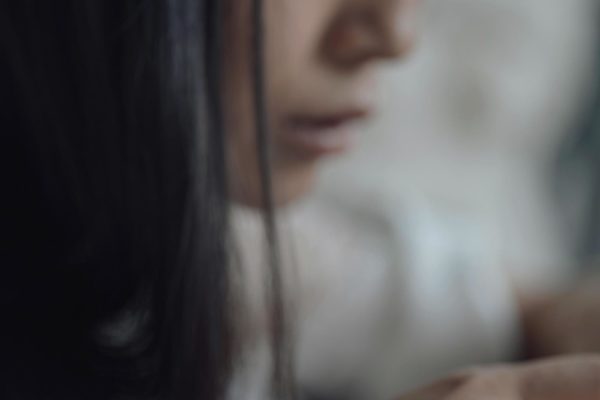 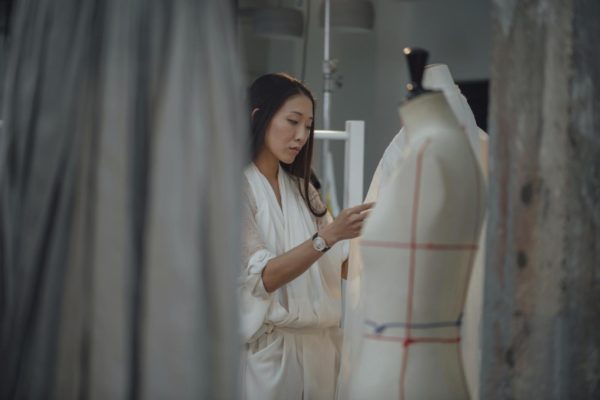 Between Vacheron Constantin and women, a long and discreet history has been written, the new chapter of which is called Égérie.
This model, launched last February, contains both elements of the past and echoes the craftsmanship of haute couture, such as the dial, which recalls the work of the pleaters, or the setting, which evokes embroidery. It is no coincidence that the ambassador of this line is the dressmaker Yiqing Yin. The delicacy of her creations, the fluidity, the elegance, the time that elapses and gives value to things, so many subtle links that bind the dressmaker and the watchmaker 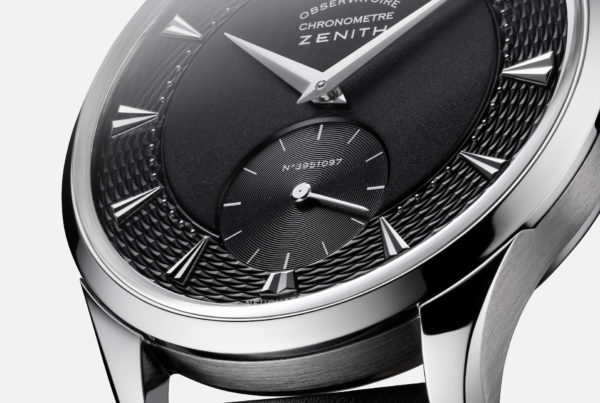 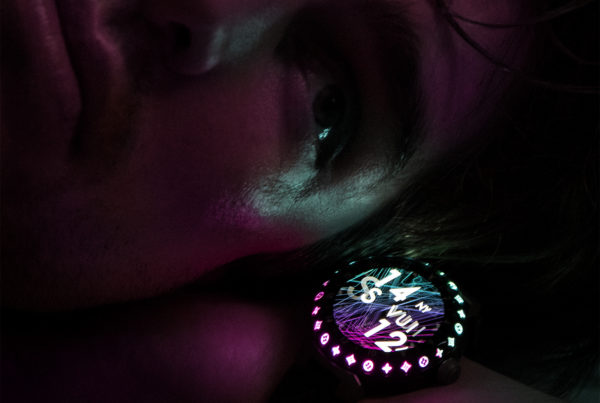 The F.P.Journe lineSport collection is celebrating its 10th anniversary…