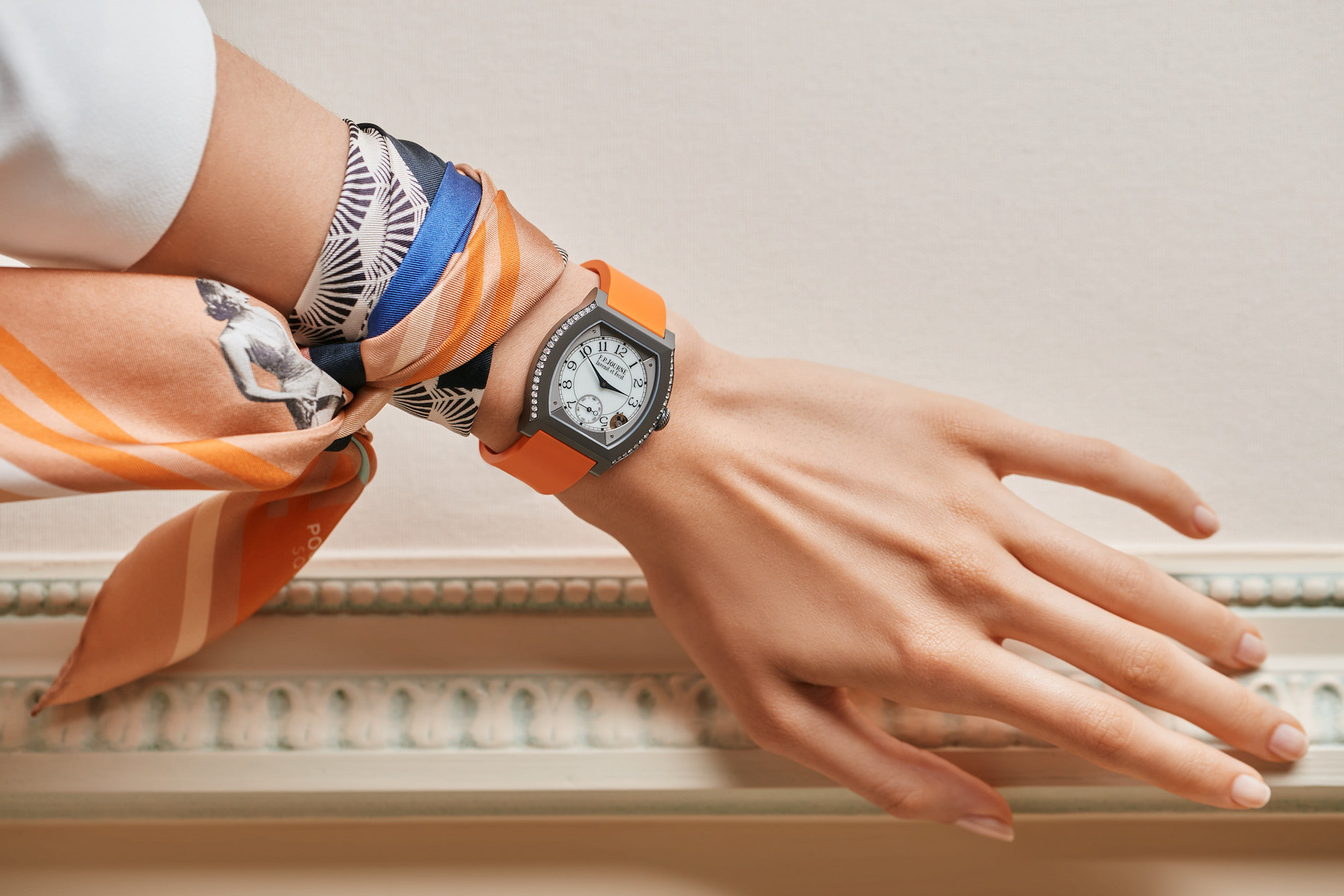 In 2014, François-Paul Journe launched a model equipped with an electromechanical movement intended for women. This watch stops after 35 minutes of immobility and resumes the course of time as soon as it is put back on the wrist. Let’s dive into the genesis of this model, which has the power not to stop time but to leave it in suspension. Isabelle Cerboneschi

There is something magical about L’élégante, the women’s watch that François-Paul Journe launched in 2014: it stops working when you no longer need it and starts working again instantly when you put it on your wrist. It is as if it obeyed Lamartine’s lines: “Pause in your trek O Time! Pause in your flight, Favorable hours, and stay!”. Even if suspending time was never the master watchmaker’s primary intention.
His wish was to offer collectors’ wives a model made for them. François-Paul Journe is pragmatic: when he creates a new watch, he is always looking for the same thing, namely a movement that is both absolutely precise and lasts forever. To enable the élegante to last as long as possible before needing service, he came up with the idea of creating an electromechanical movement that stops working when the watch is not in use. After 35 minutes of immobility the hands freeze but not the microprocessor which continues to count the time. Thus, when the movement detector, positioned at 4.30 am, comes to life, the watch automatically displays the exact time.
More than 8 years of research went into its creation. All the mechanical parts of the movement are manufactured in the F.P.Journe workshops, while the electronic part is made in Switzerland, with a microprocessor specifically developed for this watch. Thanks to this movement, the élegant offers more than 8 years of autonomy
This flat turtle-shaped model, originally designed for women, has since seduced many men. François-Paul Journe has invented a timeless timepiece in spite of himself.

An idea or an object is not born by chance. Why did you feel the need to create the élegant?

François-Paul Journe : The wives of my collectors always said “all your watches are for my husband and nothing for me”. At the beginning, I had created a 36mm diameter watch that I called La Divine, in platinum, in gold, its mechanical movement was in gold and it had a metal bracelet. I soon realised that it was too heavy for everyday use. After two or three years, I thought of something more rational. At that time, and still today, 90% of ladies’ watches have quartz movements. This meant that there was and still is a market for quartz.

However, at that time, many watchmakers were saying that the revival of the mechanical watch for women was the complications?

Yes, but that’s only a handful of women in the world. I must have two or three female collectors, but they are not interested in a women’s mechanical watch: they want men’s watches that are a bit serious. By the way, if you look at the brands that specialise in women’s watches – Cartier, Piaget, Chopard – 80% of their ladies’ watches are quartz. So I had to create an electronic watch. But quartz watches have flaws: they don’t last long enough and the battery dies too quickly. How can I improve the longevity of a watch? By saving energy. We have made the watch stop and restart. And the system is also fun. When the first pieces came out, I used to play with them all the time. 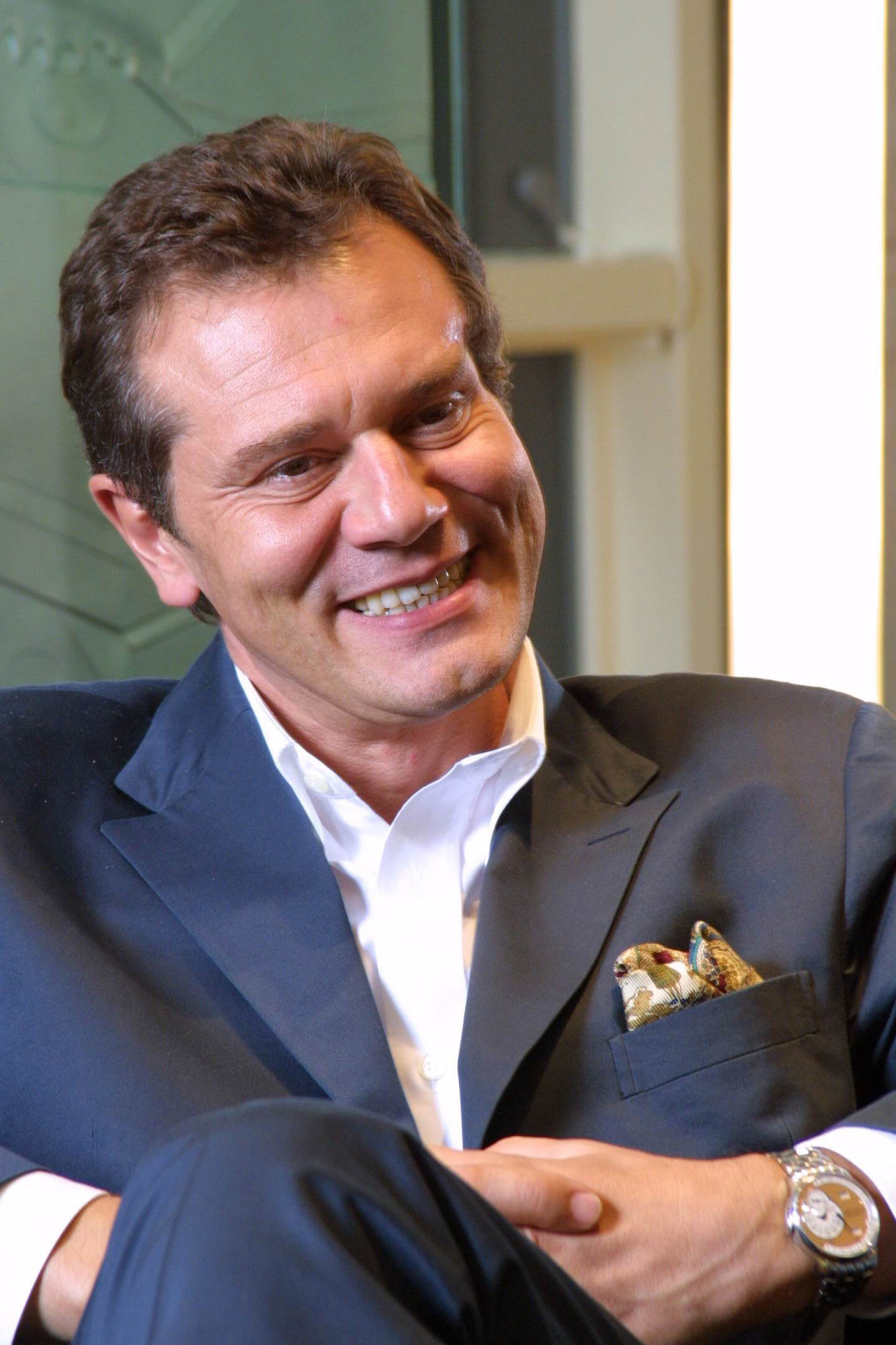 So that forced you to create this movement because it didn’t exist.

I’ve never used a movement in one of my watches that I didn’t make myself. I only sign if I create the movement. I worked with engineers. They were used to working for the industry, where we wage war on screws and pins, so that it costs less. It took me a long time to explain to them that price was not my concern: I just wanted the movement to be beautiful.

Eight years of development is two years longer than the time it took you to develop your Sonnerie Souveraine in 2006. Why is that?

First of all, I wasn’t doing it all the time. Secondly, when you develop everything yourself you go at a fast pace but when you have to rely on other people it takes longer.

This is the first watch you’ve signed where you don’t have 100% control of the movement. What was it like to let go of some of the final result?

I had to work with specialists to create this electromechanical movement. The person who designed the chip was based in Marin-Epagnier. When you enter the chip with a 3D program, you feel like you’re in the Fifth Element (laughs). These are skills that I would never have. I had no choice but to trust them. 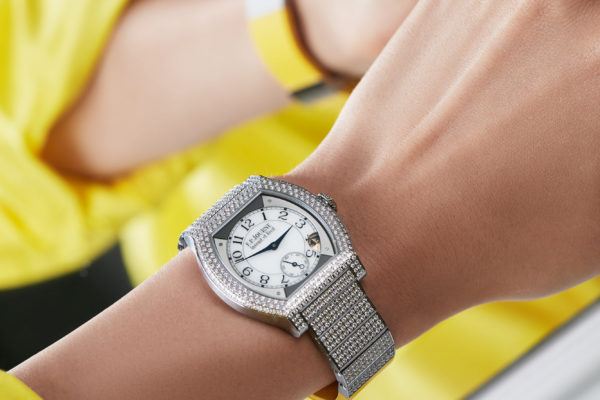 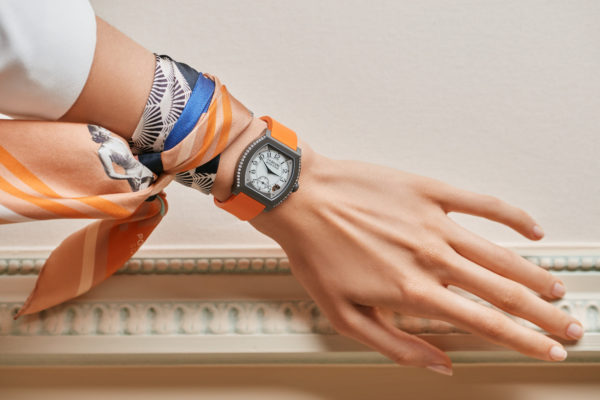 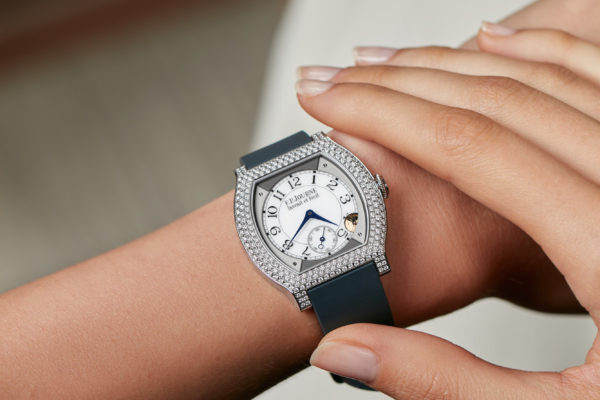 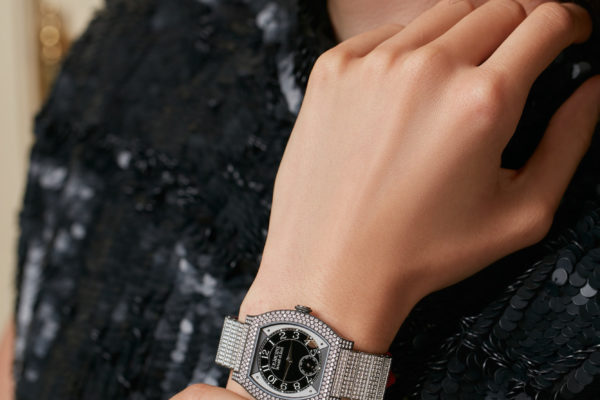 Why does it freeze after 35 minutes of immobility and not after 30 minutes?

I had asked for it to stop after 30 minutes, but the developers made it stop at 35. In reality, the movement sensor sends pulses, but depending on when the motor receives the last pulse, it can take up to 5 minutes for the processor to understand that the watch is stationary.

This watch that stops without really stopping is almost a meditative watch that allows you to enjoy the present time. But I guess that wasn’t your intention when you created it?

No, I just wanted to save energy. The basic principle is that it works as long as possible, unlike all quartz watches. I could have doubled the autonomy if I hadn’t chosen to use a second hand. It consumes the most energy.

It has another special feature: its dial glows at night.

We managed to develop a fully luminous dial in Superluminova, but it was so complicated! At the beginning, we didn’t master the technique. When you create small numbers on the dial, it’s simple, but when you deal with a large surface, there are constraints. We had to create the support, the moulding, there were problems of homogeneity. Today we have mastered this perfectly. We also create them for industry.

When this model was launched, it was announced as having an autonomy of 8 to 18 years. Do you have the necessary hindsight to confirm this?

We presented it in 2014, 8 years ago, therefore we will be able to analyse it and see with the after-sales service how many watches arrive to have their batteries changed. It is impossible to measure exactly how long a battery lasts. At some point, it stops working. Some last longer than others and it has nothing to do with the voltage.

Since the movement does not require oil, the watch is rarely serviced. Is this one of the virtuous consequences of this electromechanical movement?

It’s a dream! Thanks to this, the time between two services is extended. The problem with mechanical watches is that they regularly need servicing, every four years or so, because of the grease that congeals. 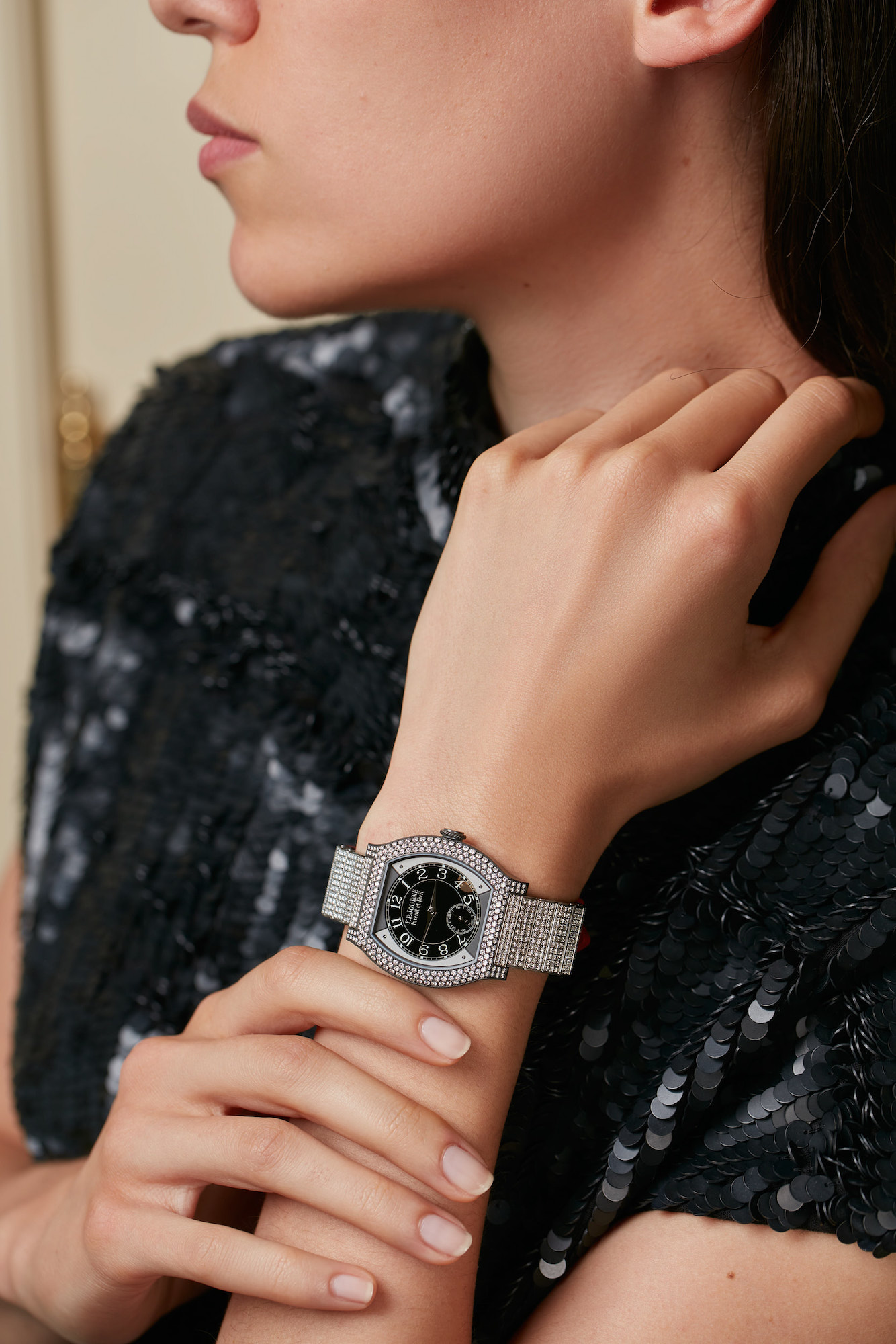 This watch was created for women, but since its launch I have seen many men wearing it. Did you foresee this craze?

I thought it would happen, but not to soon! When I introduced these watches in 2014, within the first week, a friend asked me to create a larger model for him. It became the large size.

What percentage of men buys the elegant?

I can’t say, but the large size sells more than the small. Women also wear this large model. 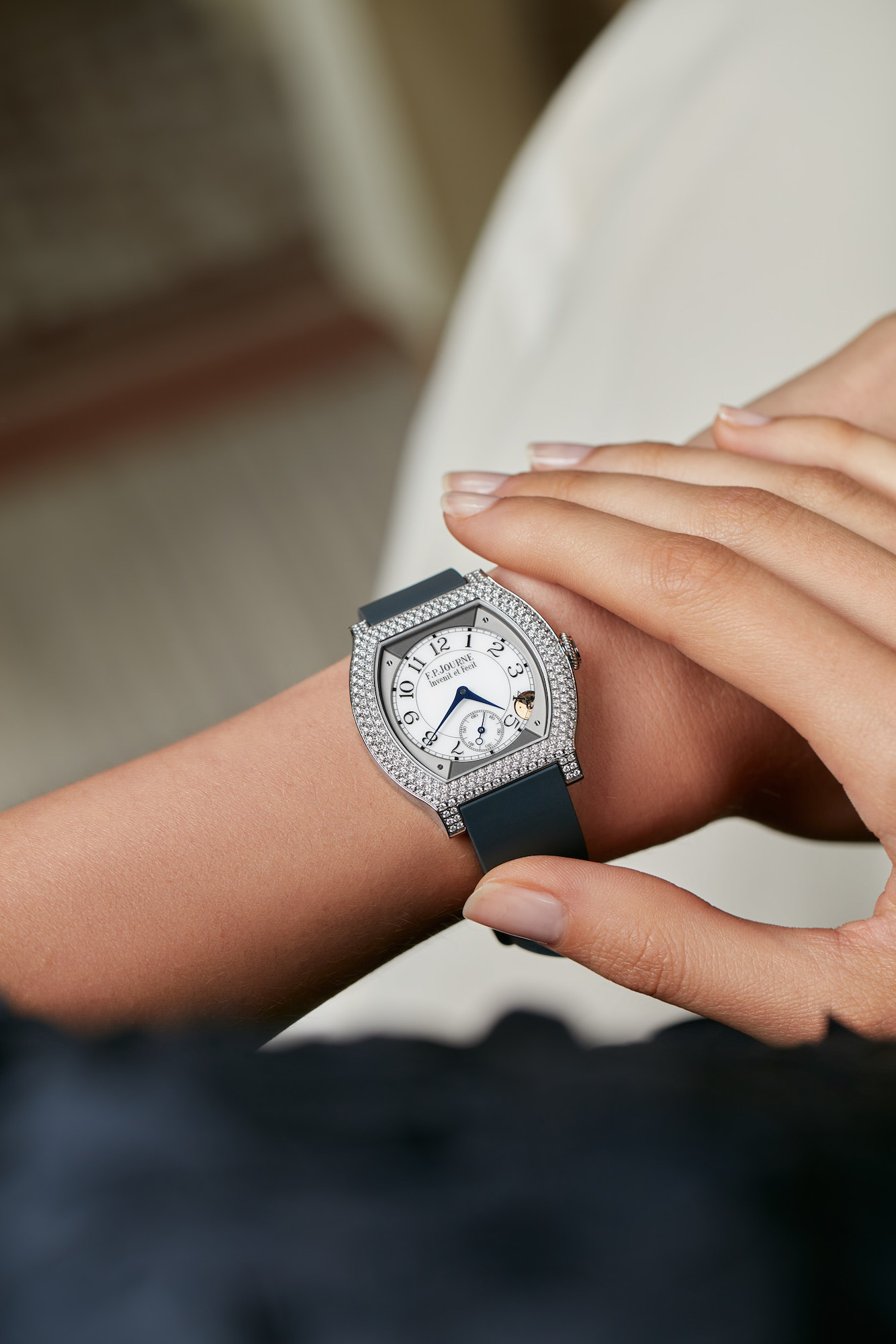 How many do you create per year?

Last year we made 450 pieces. The idea is to exceed 500 this year. But it all depends on the supply.

You launched the twelve-row fully set model in 2020. These are titanium pieces, and this material is not easy to work with. Why did you choose this?

I wanted models that could be sold at a reasonable price: that’s why I decided to make them in titanium. We have been working with this material for years and we have mastered it. The setting is done in our workshop in Meyrin. To be precise, it is a pre-setting; everything is done by machining. The gem setter only has to place the stones and fold the material over.

If you were given a super power, would you choose the power to stop time?

Then I would stop time for others, so I could walk around by myself, walk into a bank, help myself, walk away (laughs). As time doesn’t exist, I don’t see how it could be stopped. 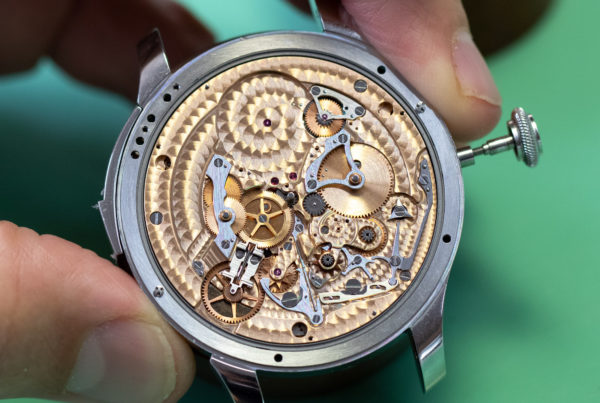 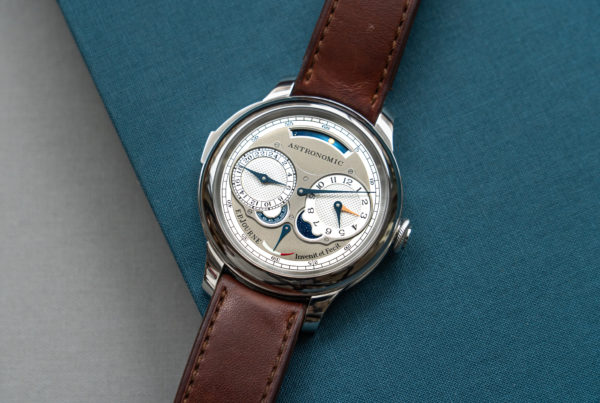 Inside the head of a watchmaking genius: François-Paul Journe episode 4